The one constant though all the years, Ray, has been baseball…This field, this game, is part of our past, Ray. It reminds us of all that once was good and that could be again.—Terence Mann (as played by James Earl Jones in Field of Dreams)

Many of us remember Terence Mann’s iconic and inspiring monologue to Ray Kinsella in the 1989 film Field of Dreams. And, of course, we all know the man played by James Earl Jones wasn’t specifically foreshadowing the future of baseball in Colorado Springs. But looking back, it kind of fits.

From 1988 to 2018, Colorado Springs was constant with its entry as the Sky Sox played in the triple-A Pacific Coast League. Most of those years—all but the last four—were spent as an affiliate of the nearby and beloved Colorado Rockies. Even when the Sox and Rockies parted ways, baseball continued with the Sox as a top-tier farm team of the Milwaukee Brewers.

The team drastically changed in 2019, but the game remained the same, when the Sky Sox were rebranded as the Rocky Mountain Vibes, a rookie-league team with a fresh, new face: a mascot named Toasty, a six-foot-tall, 284-pound s’more with hair ablaze and the coolest shades in town.

Then, the COVID-19 pandemic took the constant away, wiping out the entire 2020 season. And, when Colorado Springs was one of 42 minor league cities to lose teams as part of the contraction by the Major League organization, the city faced a future with no baseball.

Fortunately, in late 2020, the Vibes were invited to be part of the newly created MLB Partnership League, joining seven teams to form the independent Pioneer League, meaning baseball is here to stay in Colorado Springs.

It’s been a ride, of course, just as Mann spoke so passionately about: “America has rolled by like an army of steamrollers. It’s been eased like a blackboard, rebuilt, and erased again. But baseball has marked the time.”

So, on May 23, when the first pitch is tossed between the Vibes and the Glacier (Montana) Range Riders at UCHealth Park, the baseball universe will have returned to its righteous—and constant—place, just like always.

“It’s really cool to be part of something that’s so different than what was here before,” says Aaron Griffith, the team’s assistant general manager since 2019. “It looks different to some folks, but this change will benefit us a lot more in the long run. It just took a couple of years. We’re still chugging along here as long as we can.”

Even after the Sky Sox and triple-A baseball left and the Vibes entered the picture, the approach to entertainment didn’t change: bring entertainment to the stands regardless of what is happening between the lines. 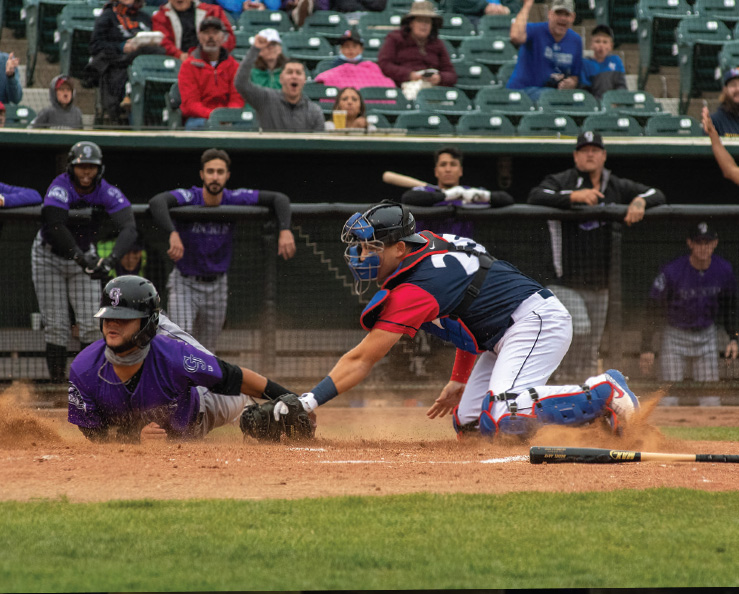 “We want to let people know that we’re still here,” Griffith says. “We all know we used to be triple-A, but what we’ve realized since those days ended is that people will come for what happens off the field—all these promos, all the family stuff, concessions—all of that. COVID helped us do that, but we’ve shifted our mindset more to tailor to the fans than what’s happening on the field.”

Plus, playing short-season baseball gives players and spectators alike a more comfortable experience with the late-spring start. “We’re not playing in the snow anymore and dealing with the harsh conditions we know so well in April and early May,” Griffith says. “We picked the best weather in which to play, and this year, we’re home on the big holidays of Memorial Day weekend, Fourth of July, and Labor Day weekend. We’re hoping for some big crowds.”

“Oh, people will come, Ray. People will most definitely come.”—Mann