Turning Monsters Back into Kids Skip to main content

Can getting kids outdoors for a mere 20 minutes a day improve their mental health?

This summer, a press release from Great Outdoors Colorado (GOCO) confirmed our worst fears: “Research shows that cases of depression, anxiety, sleep-related issues, and other behavioral problems have become more prevalent in kids during the pandemic.”

It went on to prescribe a surprising treatment: Getting kids outdoors for 20 minutes a day improves their mental state. GOCO references research that shows, among other things, urban test subjects who experienced short “nature events” (translated: going outside) exhibited a marked reduction in stress indicators in their saliva, among other things. Although 20 minutes may sound trivial, other studies show that Colorado children only average between four and seven minutes daily outside in unstructured play.

Jackie Miller is the interim executive director of GOCO. Using state lottery proceeds earmarked for reinvestment in our state parks, trails, wildlife, rivers, and open space, GOCO has launched a public service campaign aimed at improving the mental state of kids. “Generation Wild” features whimsical monsters transforming into children when they step out the front door with the tagline “Just 20 minutes outside turns your kid into a kid again”

“It’s in response to how the pandemic has negatively impacted kids’ mental health,” says Miller. “Kids were being cut off from their normal routine; they experienced all the same effects as adults did. We’ve partnered with some folks at Children’s Hospital on research that indicates that really all it takes is just 20 minutes outside to recall the benefits that the outdoors provides. It’s really the ultimate stress reliever: It reduces anxiety, helps to address attention deficit, boost mood, and all that other good stuff.” (Other studies touting the health benefits of the outdoors can be found at GOCO.org and GenerationWild.com.)

“We launched the campaign in 2017 with a list of 100 things to do before you’re 12,” says Miller. “The activities ranged from collecting roly-polys in your backyard to building hopscotch on your sidewalk to outdoor activities that could be done in the local or state park and then farther out into the backcountry. We have found that parents and caregivers really appreciate having lists like 100 things at their disposal.”

This year, GOCO added “20 ideas for 20 minutes outside”—another list of simple activities kids can do in their own backyard. Ideas include creating a bike obstacle course, making mud fossils, and playing flashlight tag. “We did an ethnographic study to inform our approach to Generation Wild. While it’s wonderful for folks to aspire to hike 14ers and camp in the backcountry, we wanted to let folks know that the outdoors can be a free, accessible place to play; you don’t have to travel beyond your own backyard. Activities don’t have to require a ton of gear, and transportation can be a big barrier to families getting outside together. So, all of our campaigns are really geared toward everyday epics.” (Both lists can be downloaded at GenerationWild.com.)

Miller’s own experience as a mother of two daughters, ages 10 and 8, confirms the research she cites. “The outdoors makes them better kids. We come back from a camping trip, dirty and exhausted, and they’re just happier and more content. If your kids are stuck inside with technology, they become crazy monsters. Show them outside the front door for 20 minutes, and they’ll come back a better kid.” 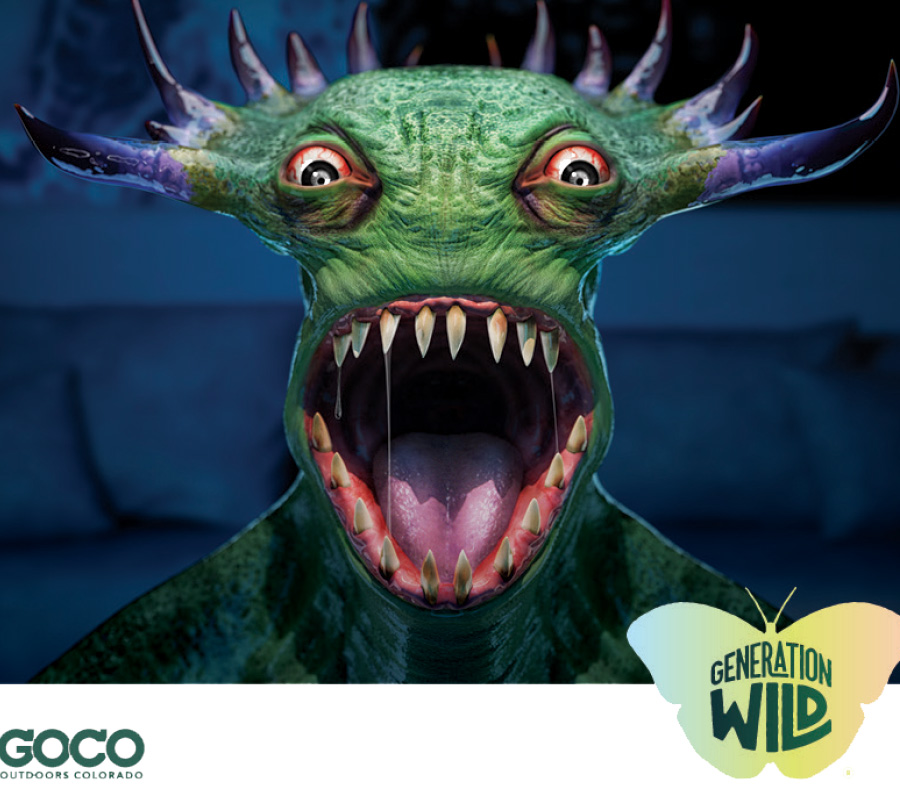 A coalition in Colorado Springs has taken the Generation Wild youth-and-outdoors mission and run with it. Generation Wild of the Pikes Peak Region (GWPPR) formed to offer new outdoor experiences for kids and families in southeast Colorado and inspire a love and appreciation for the natural beauty of their hometown and nearby outdoor spaces.