Plus One - History of the AdAmAn Club Skip to main content

In the 1920s, a pair of brothers from Colorado Springs made it a habit of climbing Pikes Peak on New Year’s Eve. Ed and Fred Morath must have thought it was only right that they invite others to join them in the fun. So, after their 1921 climb, in 1922, they formed what became known as the AdAmAn Club. The idea was that they would Add one member (A mAn) each year. The capital “A”s represented mountain peaks.

The original “Frozen Five,” as they called themselves, started a Pikes Peak region tradition when they added shooting off fireworks to the expedition. This year, the club celebrates its 100th anniversary climb.

The club’s official history tells a dramatic story: “Carrying 175 pounds of powder, flares, and food, the climbing party departed Manitou Springs at 6 a.m. on Sunday, December 31. Following the cog railroad tracks, the group noted a temperature of 2° below zero at the halfway house. The temperature continued to fall, and the winds increased in velocity as they climbed higher. Eight hours after starting, they arrived at the summit in an exhausted state. They reported that the last two miles of their ascent took three hours to complete because of extreme winds and ice-covered stretches.”

That account did not discourage others from wanting to join the club, however. In fact, it has always been a prestigious honor.

Don Sanborn, who was president of the club from 2010 through 2017, recalls his grandfather being a member and later encouraging him to do the same. Sanborn, who grew up in Cascade, was an avid climber all his life, so when he came back to Colorado Springs after college and some world travels, he climbed with the club as a guest first, then a member in 2003. “Generally, you climb with two to four people,” he says, “so I thought, ‘30 people, this is crazy.’ But it was the most fun thing I had ever done in my life. I was hooked.” 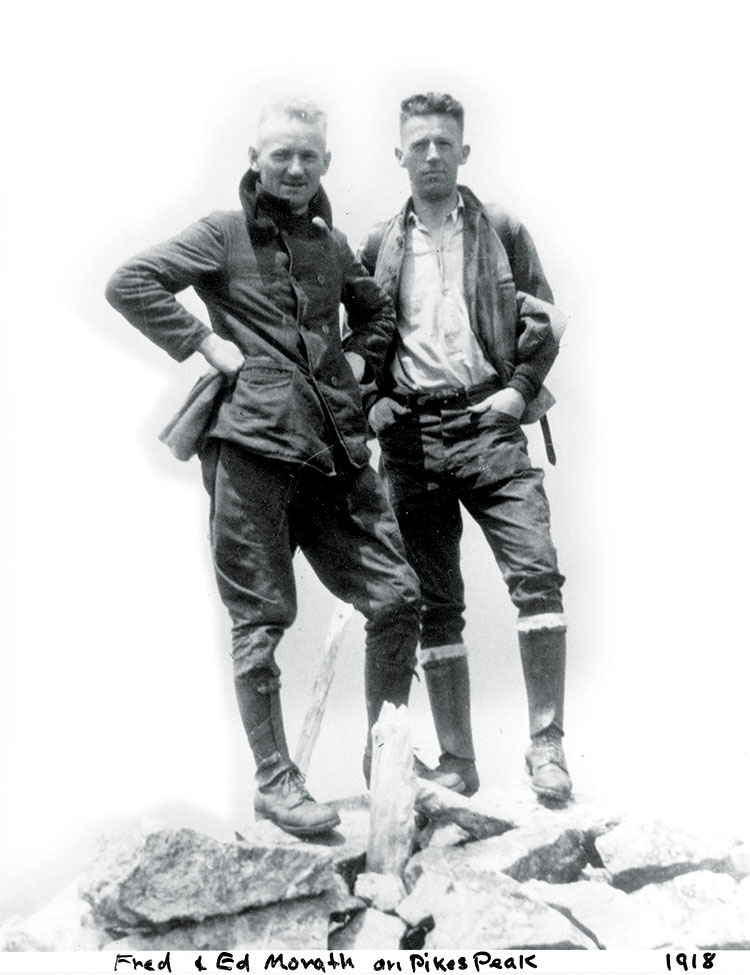 No kidding. He’s done the climb 22 times. The climbers are limited to about 30 or so because they all have to fit into the overnight accommodations at Barr Camp, halfway up the peak. The climbers leave on the morning of December 30, climb to Barr Camp for the night, and then finish the ascent on New Year’s Eve. At midnight, they shoot off the fireworks. They get a ride back down afterward.

The club has about 30 active members, not all of whom make the climb every year. The slots not filled by members can be filled by guests—some of whom consider one climb enough. The first woman added to the roster was Sue Graham, who did guest climbs in the 1980s and became a full member in 1997. There are currently three female members, but that doesn’t mean the club is changing its name. It’s kind of an iconic moniker, Sanborn says. “We don’t even spell the word ‘add’ correctly,” he says, laughing. 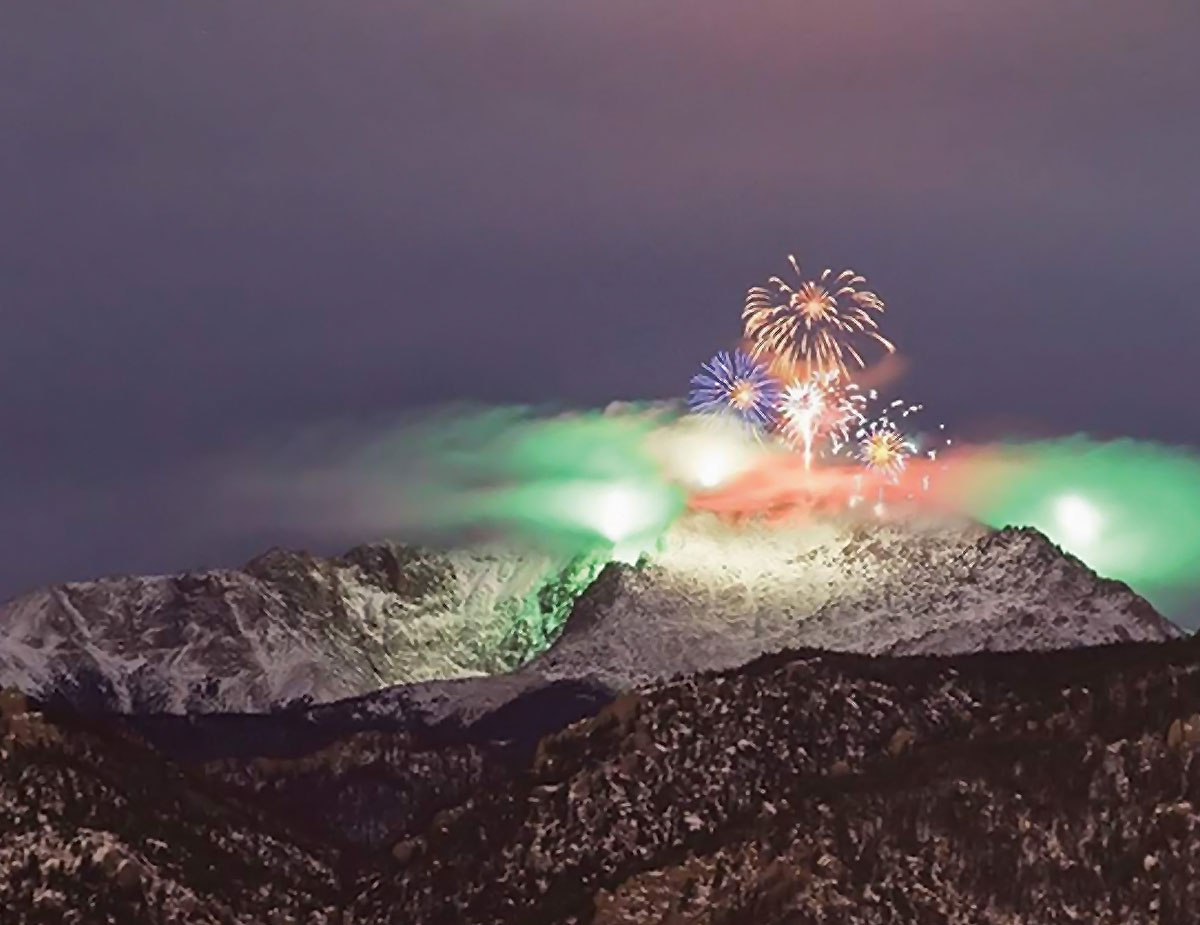 They usually hike Barr Trail but, on occasion, have had to use the Pikes Peak Highway if the snow is too deep. The highway’s a much easier path, Sanborn admits, adding that the climb can be rather terrifying at times. “Probably the hardest was the one year we had to turn around in 2010. It was minus 25°, and the wind was blowing from the south, across the face, and it had snowed the night before. We got above timberline, and it was miserable. I remember thinking I would lose fingers or toes or even die. Just past the two-miles-to-go mark, they decided we had to turn around or somebody would die up there,” he recalls.

“We had several people grumbling, saying we shouldn’t turn around,” he continues, “but we had like seven cases of frostbite that day. The next year, almost everybody had new, better gear. Then we had really high winds. That was rough, too. I was blown over. One guy cartwheeled down the hill and tore his ACL. I think he’s the only person who’s been really hurt all these years. We’ve had people slip and slide down the hill a ways. Now, most of the climbers wear micro-spikes on their boots.”

Ted Lindeman holds the record for the most climbs among living members. He’s done it “about 50 times, I think,” he says. Lindeman, 70, says that generally the hardest part is what they call the “Golden Stairs” at just about 13,000 feet, “where the air is pretty precious” and the footing on loose rock becomes unstable. “Sometimes it seems like there’s not a single good spot to place your next boot. It’s like walking on ice.”

So why keep doing it? “It’s a family tradition,” he says. “My dad and brothers have climbed with me a bunch of times. It makes for good stories. They all even have an element of truth.” Sadly, his knees have informed him he probably won’t climb this year, so the club is looking toward the next generation to keep the tradition alive.

Tyler Stuart, who got interested in the club through his dad, Dan Stuart—the current president—is one of the youngest members of the club at age 35. His first New Year’s Eve climb was in 2005 when he was 19, and he’s done it 11 times. “The first year I did it was pretty easy because there was hardly any snow,” he says. “I like the challenge. Every year, it’s a little bit different. It changes with the weather. And it’s so cool to be on top and stand right under the fireworks and look down on the city below.”

Thomas Lear, another member, made his first climb with the group in 2013, bringing his extensive climbing experience to the fold. “I am a huge history buff, and being able to be a part of such a unique event is priceless to me,” he says. Although the climb is tough that time of year, he keeps doing it because of “the amazing history of this event…plus the company of a great group of hikers for two days and the experience of seeing in the New Year from 14,000 feet with the best view of the show!”