Our local distillers take their craft seriously whether they are blending a bone-dry gin, an award-winning whiskey, or even experimenting with creative flavor infusions that would both shock and delight the purists among aficionados. Here, we get to know three of the best in the area.

Lee Spirits: American Gin With A Playful Side

There’s a reason that most of the mass-produced gin you see on liquor store shelves feels very British: It is. London dry was the gold standard in gin—until the Americans came along, that is. “Instead of using an actual fire to heat the still, by the time Americans began distilling, there was steam technology available,” says Cole Chapman, Lee Spirits’ head distiller. This led to what is known as single- or one-shot distillation, which is unique to America.

One might ask if you can really taste the difference. Chapman points out that the flavors inherent in gin can be polarizing, and this process mellows them out. “Instead of sharp spikes in flavor for each botanical,” he says, “you get what I describe as bold, round flavors. You still have an intensity, but the flavors marry really well into each other.”

Lee Spirits additionally offers a range of flavored gins that he says stay true to the personality of the flagship spirit. “We felt that we could make an authentic representation of those flavors using a dry gin as the base. You have all of the botanicals that naturally flavor the base spirit, and then you can layer other flavors on top.”

One of the first was the ever-popular lavender. “Essentially, the lavender gin allows you to take, say, a simple Tom Collins—gin, lemonade, and a little bit of sparkling water—and have all those wonderful notes that you would get from the drink elevated with a woodsy, earthy lavender flavor,” he says. “And by using a gin base instead of vodka, it allows the flavors to be expressed on different parts of the palate as opposed to dominating all of the flavors that you’re experiencing.”

The company’s strawberry ginger began life as a mix of fruit and pink peppercorns, but it soon became clear that ginger was the better flavor fit. “For the gin purists,” Chapman says, “this is still a 90-proof base spirit with sugar that is less than 2%.” Beyond basic, he says, “You get a balance of fresh, bright strawberries on the front with a ginger spice on the back to keep it a bit honest, and you get a lot of complexity out of it.” 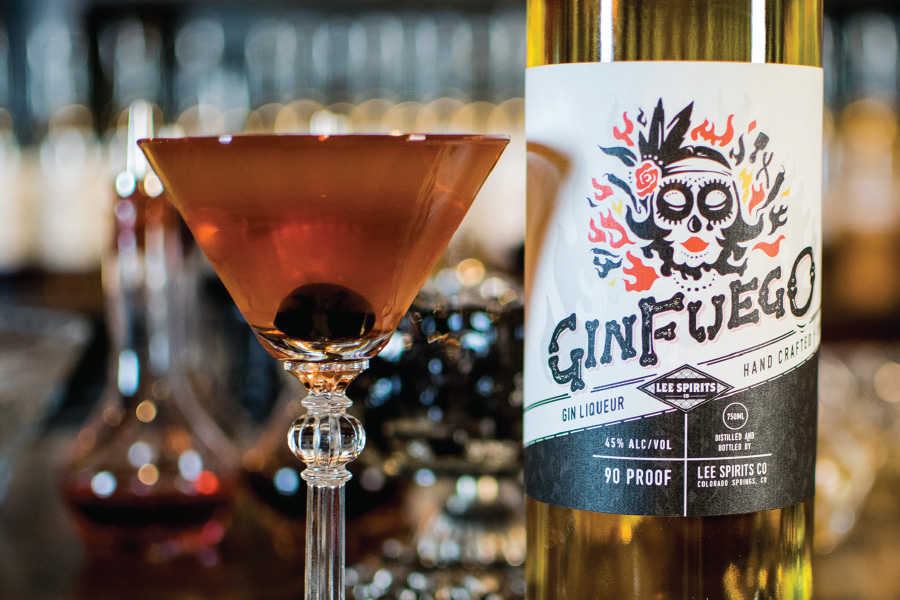 The Ginfuego, as might be intuited, embodies a mix of red and green chiles with Ceylon cinnamon, which Chapman says expands its repertoire. “Instead of having a spirit that’s limited to something like a Bloody Mary, you can take our Fuego gin and make a classic Martinez with it, with sweet vermouth and maraschino liqueur, and have a complete representation of everything that a Martinez should be. It offers a subtle spice at the finish that takes the cocktail to another level of complexity.”

In addition to gin, Lee Spirits produces a line of classic liqueurs, including one exclusive to them in the United States. Forbidden fruit liqueur, which is a blend of white grapefruit, baking spices, and local honey, essentially disappeared from shelves in the middle of the last century. Chapman and his team tasted vintage bottles to get the recipe right. “This product uniquely offers a delicate balance of citrus, spice notes, and a rich source of sweetness from the honey,” he says. “It’s extremely adaptable.”

Among the other historic notable potables is a crème de violette; the recipe discovered printed in a newspaper from the 1920s. This led to the creation of Lee Spirits crème de rose, which Chapman admits was a challenge, in terms of cocktails, at first. “And then some spark happened where I figured out you can use this in place of any sweetener you would normally use, and it’s magic. It’s a very soft, delicate rose flavor—a combination of red and pink petals with Madagascar vanilla to round it out. It pairs extremely well with whiskey and tequila as well as gin, obviously. In the summer months, I’ll drink it with tequila and lemon, and then in the winter, you can pair it with an $80 bottle of rye, and it will absolutely compliment the rye and not destroy the beautiful balance of flavors.”

From the one-shot gin to the unique usage of fruit, florals, and spice, it all comes down to layering and complexity.

Distillery 291: Their Whiskey, Their Way

Although Distillery 291 is the oldest whiskey distillery in Colorado Springs, you may not be aware of its award-winning whiskeys. Owner and founding distiller, Michael Myers, focuses on grain-to-glass whiskey production and distribution, and as such, the tasting room has never been in a traditional entertainment area. However, the operation has grown from a 300-square-foot, one-man operation to opening a new 26,000-square-foot space with more than 30 employees. The new location features a large lounge area with an impressive cocktail menu and expanded tours and whiskey tastings.

Distillery 291’s range of whiskeys utilize a proprietary process that includes (triple) distilling and attention to detail. Myers, a former professional photographer, turned his artist’s eye toward whiskey making and hasn’t looked back. From grain to barrel to bottle, 11 distinctive Colorado whiskeys are made by hand from scratch, utilizing grains from the Colorado plains and water collected from Pikes Peak reservoirs. As Myers says, “Everything matters.” 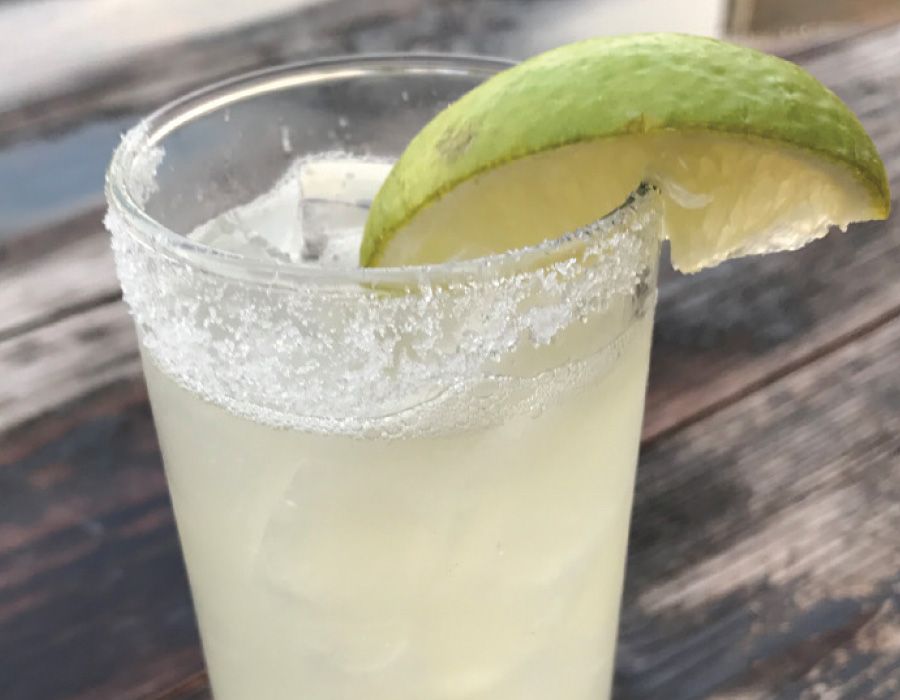 Whiskeys include bourbons and ryes with carefully curated grain blends; a short-aged, summer sipping American whiskey; unaged white whiskeys, and even a citrus clove liqueur. It is the most highly awarded whiskey in Colorado, earning multiple national and international awards.

Myers says a well-stocked bar should be equipped to build the classic cocktails. “I’d recommend our small-batch bourbon or rye whiskey for an old fashioned, and the 291 fresh Colorado whiskey to make our trademarked Whiskarita. The 291 Colorado rye whiskey White Dog makes a fantastic white Manhattan or Dog & tonic. And for a perfect black Manhattan, choose the 291 Colorado whiskey barrel proof, single barrel. Our white whiskeys are exceptional replacements for traditional white cocktail spirits and are distilled to bring out character for a unique twist on a classic cocktail.”

In addition to the staples, the special release whiskeys include the highly sought after 291 Bad Guy bourbon whiskey to the newest annual release, 291 M Colorado Whiskey, which is finished by barrel aging in maple syrup barrels.

“What will always define 291 Colorado whiskey is its spirit,” says Myers. “Passion permeates every sip. Our whiskey embodies traditions of the past married with the boldness of the future.” 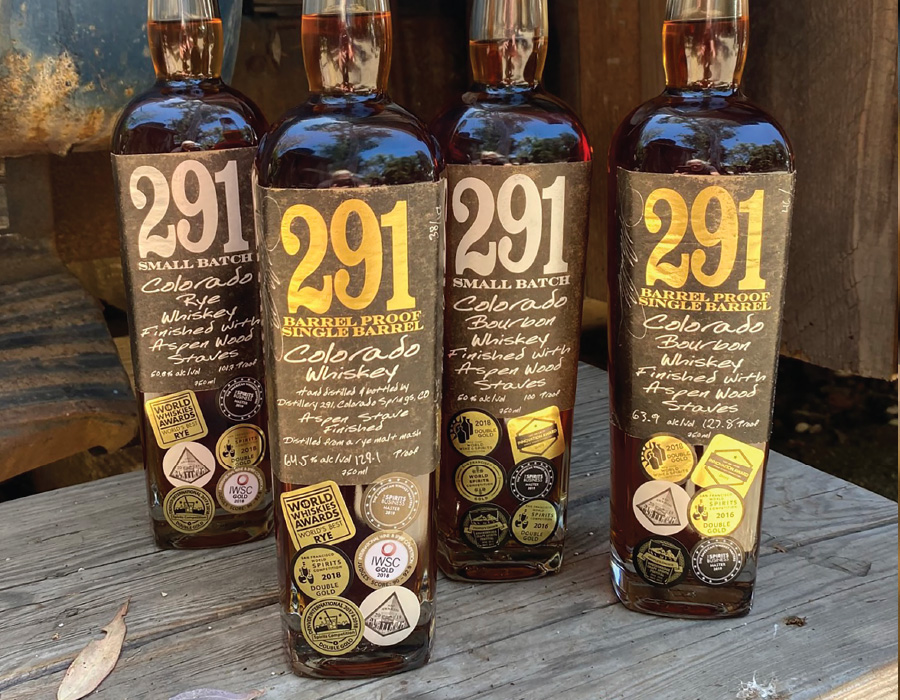 1350 Distilling: Fighting for the community

As a veteran-, teacher-, and woman-owned business, 1350 Distilling not only names its range of spirits for military history and distinguished honors (for example, the Fleet Admirals’ barrel-aged rum and Minuteman vodka) and first responders (Code Four—“everything is safe and good”—115-proof cask strength straight bourbon whiskey), 10% of the profits go to local charities via the company’s Angel Battalion philanthropic arm.

Of course, working hard and taking duty seriously doesn’t preclude having a little fun. The Old Blood & Guts strawberry flavored vodka won a silver medal at an international tasting last fall. When the Taste Lounge opened in November 2019, they began infusing vodka with real strawberries. In response to repeated requests to bottle it, it’s now available for signature cocktails across the Pikes Peak Region in various bars and restaurants.

The Five Alarm Cinnamon Fire bourbon also started as an in-house infusion, made for firefighters visiting the IAFF Fallen Firefighter Memorial in 2019. With its huge success in the Taste Lounge, they began bottling the three-year aged bourbon infused with cinnamon chips in September 2020. It has become a huge hit, perfect for an old fashioned, hot toddy, and other mixologist creations around Colorado Springs. Drop by the Taste Lounge for a house-made coffee liqueur with the Five Alarm.