Years ago, Colorado Springs has failed to impress the state’s foodies. It has never been a necessary lunch stop along the I-25 corridor. Sure, there was the occasional hidden gem known chiefly by neighbors and determined connoisseurs, but they often got lost between chain restaurants and fast-food venues. However, in the past decade, Colorado Springs has been experiencing a revolution of flavors with rising stars making their mark on the local landscape. Leading the charge is the army of food trucks dotted across the city. And the owner of one has a dream to put Colorado Springs on the gastronomic map.

Fernando Trancoso, the owner of TEPEX, has his background in fine dining from having managed some of the top restaurants in Santa Fe. Born in Aguascalientes in Central Mexico,  Trancoso got his start in food service by working at local taco stands. This early experience birthed his love of food, which was further developed by the women in his family. He remembers walking to school in the mornings and stopping by the house of his 109-year-old great-grandmother to eat her freshly made tortillas, beans, and chiles.

When he was 16 years old, he moved to Santa Fe, New Mexico, and started at the bottom rungs of the restaurant industry, flipping burgers and washing dishes. He learned his cooking skills on the job, copying the chefs’ techniques and practicing them at home until he perfected them. Over time he moved to the front of the house and worked his way up from busser to waiter. Eventually, he took on the manager role at some of the best fine-dining restaurants in Santa Fe. And as if that were not enough, he is a certified sommelier.

Trancoso invites us into his food truck as he prepares a special meal for us. The space is functional and has no frills, and he admits that keeping it heated on the coldest winter days is challenging. But you can immediately see the professionalism of his setup. Everything is well organized and spotless. He grabs his pan and lights up the burner. And then the magic begins. 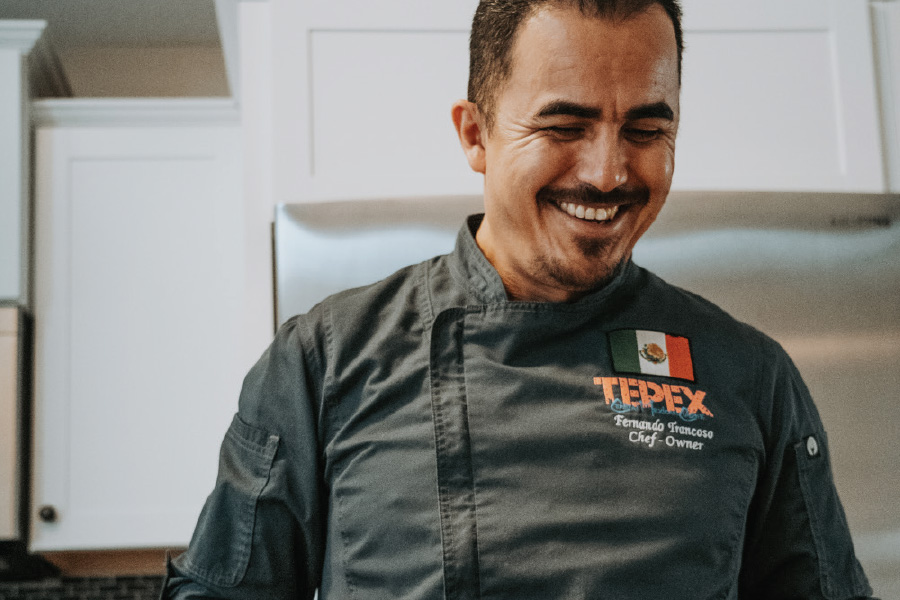 An aromatic fragrance floods the truck’s interior as two beautiful filets sizzle over the fire. Trancoso shakes the pan back and forth, causing flames to shoot up from the skillet in a fiery spectacle. It’s obvious he’s enjoying himself. As he cooks, Trancoso tells how he started his own business. “At the beginning of the pandemic, as you know, fine dining was in a really tough situation. Everything was closed. So I found myself unemployed. I researched Colorado Springs and thought it would be the best place to start my business.” He thought it was a beautiful city, and with the demographics and the burgeoning food scene, he saw a niche he could fill. He invested everything he had into his truck and came out here during the worst winter months, during the pandemic, to open TEPEX.

TEPEX has become known for its Central Mexican-style street tacos, which are the menu’s staples. Birrias, a taco made with braised beef, are the most popular, but Trancoso considers his carnitas his specialty. Made from his family’s recipe, he learned the dish as a kid and continues to make it the same way to this day. But Trancoso doesn’t limit himself to tacos. His menu frequently changes as he responds to the seasons and his inspiration. Customers checking his social media can often expect surprise announcements of unique menu options offered for a limited time. This element of spontaneity is not something one would expect at a busy food truck, but Trancoso doesn’t want to be pigeonholed into serving only one kind of food. He has a passion for creative exploration and artistic expression. “I love telling a story through my food. That’s what I love to showcase. We don’t eat to survive anymore. Eating is a pleasure. Food is love. Food is life.” 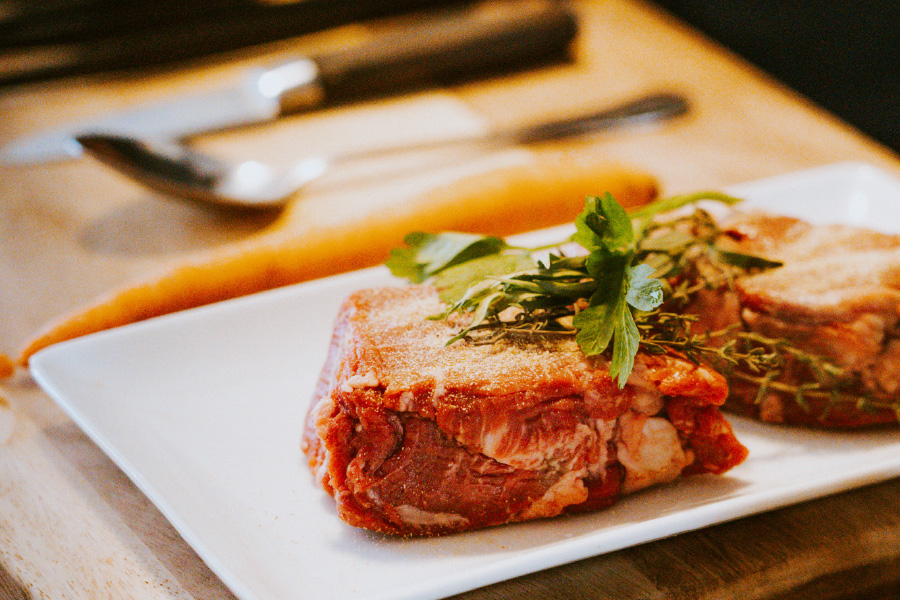 This love is apparent as he serves the two dishes he created. They say you feast with your eyes first, and the plates’ vibrant colors and aesthetic arrangements deliver a satisfying vision. Perfectly cooked filets served on top of mole sauce and topped with bright orange carrots, purple cabbage, and red peppers show Trancoso’s talent for display. As does the colorful plate of scallop ceviche served over heirloom tomatoes and topped with Fresno peppers, cilantro, and the surprise ingredient – a passion fruit and habanero sorbet. And the flavors live up to the presentation.

The filets are juicy and melt in your mouth. The mole sauce is rich and complex but not overwhelming as some tend to be. As we rave over the sauce’s flavor, Trancoso modestly says, “Oh, that was a quick one.” He then lists the ingredients he had to substitute upon realizing he didn’t have all of what the recipe called for. The combination sounds anything but quick. Instead of plantains, he used dried apricots and walnuts instead of pumpkin seeds. He mixed cranberries in with the raisins. And five different types of chiles add just the right amount of heat. Though most Americans expect mole sauce to prominently feature cocoa, Trancoso prefers to add just enough to give depth of flavor but not overpower the delicate balance. As he describes his process, it becomes apparent that he has a knack for thinking on his feet to combine surprising flavors in a creative way. 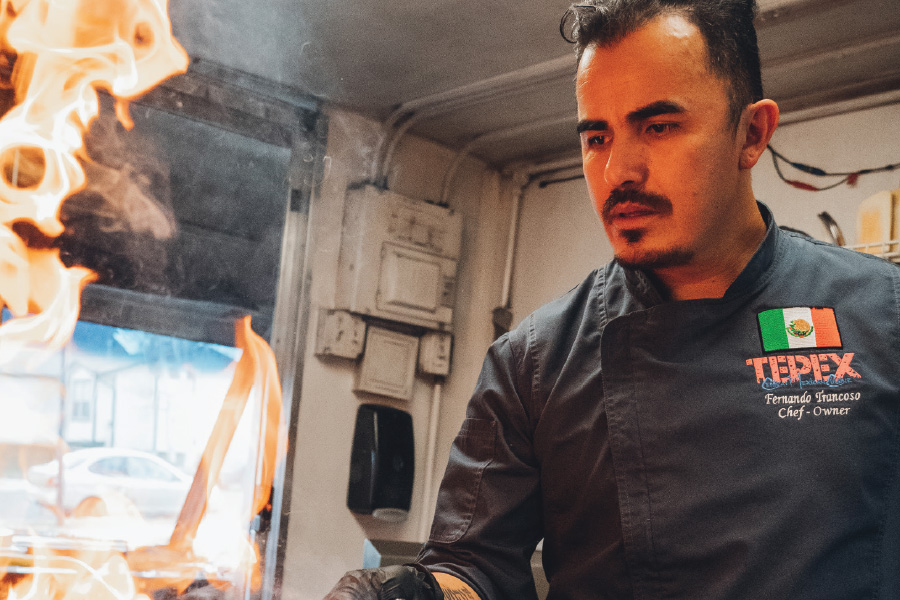 Once I taste the scallop ceviche, it becomes a new obsession. The flavors hit your tongue in succession before blending together in a combination that keeps your mouth watering. The scallops are light and almost creamy, and their flavor is punctuated by the immediate tartness of the tomatoes and blood orange. The cilantro gives a piquant kick, followed by the soothing sweet and tangy passion fruit sorbet. And then, the peppers leave a satisfying heat to wrap up the sensations.
The experience was on par with any top-rated gourmet meal. Not something you expect from the owner of a food truck. But Trancoso has big plans.

When he is finally able to open his brick-and-mortar restaurant, he envisions it to be a dual-concept locale. On one side will be the bar with a relaxed atmosphere and a limited menu featuring what he currently serves at the truck. People will be able to order tacos and street food while hanging out with friends and sharing drinks. On the other side, he wants to serve more of the kinds of food we just enjoyed. His background is in fine dining and wine sales, and this is where he would bring that knowledge to bear. Chef Fernando knows that his customers can go anywhere, so he wants to give them a culinary experience they can’t get anywhere else. He creates food where every ingredient serves a purpose, and this space, which will be the perfect destination for dates and special events, will give him the freedom to create new things. Both the bar and the fine dining room will feature the diverse cultural influences of his Central Mexican heritage.

Trancoso knows there are many aspects of his culture that most Americans have not had the opportunity to experience. Central Mexico has influences from all over the country. They are only hours from the coast and its fresh seafood. The access to the north brings the tradition of tortillas and beef. And Central Mexico itself has a strong history of using vegetables. There is one delicacy from the area that Trancoso has been using for a couple of years. Huitlacoche, or corn truffle, is a fungus that grows on corn when the kernels get oversaturated with water and turn black. Trancoso says they taste like truffles. They are soft and spreadable and have a variety of uses in a myriad of recipes. Using unique ingredients like that is one of the ways he wants to expand the perception of his country. “One of my first goals is to show people a different face of Mexican food. Be different. Look at the tradition, but make it your own.”

And his goal is not only for himself. He wants to inspire other Mexican chefs to be brave and be different and not just create what’s expected. He doesn’t make fajitas or burritos and only uses sour cream on the rare occasion the recipe calls for it. “We work so hard in flavor development. By the time you add sour cream, all you taste is sour cream. If I make tomatillo salsa, I want you to taste the tomatillo in its purest form.”

“There’s so much talent in town. So many places doing new things.” Trancoso expresses his high hopes for our city’s emerging epicurean culture. He imagines a day when Colorado Springs becomes a mandatory destination along the I-25 corridor as travelers detour downtown to dine in a community known for its innovative food. The foodies of the city share that dream.